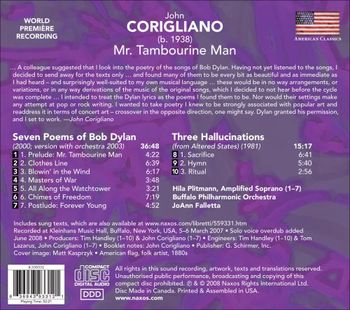 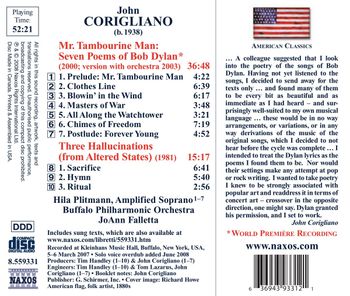 …A colleague suggested that I look into the poetry of the songs of Bob Dylan. Having not yet listened to the songs, I decided to send away for the texts only…and found many of them to be every bit as beautiful and as immediate as I had heard—and surprisingly well-suited to my own musical language…these would be in no way arrangements, or variations, or in any way derivations of the music of the original songs, which I decided to not hear before the cycle was complete…I intended to treat the Dylan lyrics as the poems I found them to be. Nor would their settings make any attempt at pop or rock writing. I wanted to take poetry I knew to be strongly associated with popular art and readdress it in terms of concert art—crossover in the opposite direction, one might say. Dylan granted his permission, and I set to work. — John Corigliano

"Hila Plitmann, Corigliano’s chosen soprano, is a composer’s dream. Throughout her enormous range, her singing is precise, expressive and lit with intelligence. Her wondrous diction – nothing like Bob Dylan’s – lends his lines a crystalline beauty." Larry Fuchsberg, Minneapolis Star Tribune